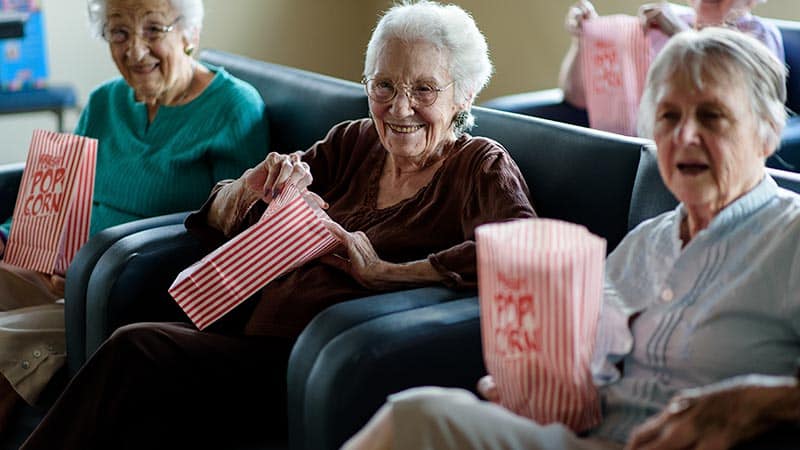 Top 5 Movies To Watch With Seniors

I don’t know about you, but I love movies.  Growing up, one of my favorite things to do was to sit down and watch movies with my grandparents.  So, this list is my top 5 movies that I think would be the most enjoyable to watch with seniors.

Everybody has different sensibilities, so this list will only include movies rated G or PG by the MPAA.

One of my personal favorites.  This is a timeless classic starring Julie Andrews and featuring some of the most famous and influential showtunes in history.  This film is about a young Austrian woman who is sent to the home of a strict, retired naval officer to supervise and tend for his seven children.  She proceeds to teach the children the value of fun, music, and love.

Hidden Figures is the incredible true story of three African-American women who worked at NASA during the 1950s and 1960s.  This film shows the vitals roles Dorothy Vaughn, Mary Jackson, and Katherine Johnson played in the 1969 moon landing as well as the seemingly insurmountable hurdles they had to overcome.   Directed by Theodore Melfi, this is a must-see masterpiece.

One of the best horse movies ever made. Diane Lane plays Penny, a housewife and mother who agrees to take over her family’s Thoroughbred farm.  While navigating the world of horse-racing, she works with John Malkovich’s character, Lucien Laurin, to train the titular horse to participate in the Triple Crown race.  This film is inspirational and very well-made.

In my opinion, this is the best movie Disney has ever made.  This is an animated epic in which a lion, Simba, learns to accept his past and follow his destiny.  The animation is stunning, and it has some of the most memorable music in film history.  Jeremy Irons voices the villain, Scar, and gives one of the best vocal performances I’ve ever heard.

One of the most important movies ever made as far as filmmaking influence goes.  This entertaining musical starring Judy Garland has inspired sequels, prequels, spin-offs, and one of the most popular Broadway shows of all time.  The Wizard of Oz follows Dorothy and her trusty dog, Toto, after they are carried away in a tornado to the mysterious land of Oz.  Dorothy must travel through Oz to find the wizard who can send her home.  Unfortunately, Dorothy is involved in an accident upon her arrival which sets the Wicked Witch of the West on a quest of her own to stop Dorothy in her tracks.

Available to stream on HBO Max.

It was really hard to condense this list to just 5, but I wanted to leave more room for discussion.  We’d love to hear what your favorite movies are!  Let us know in the comments!

Aspire Home Health and Hospice is not in any way affiliated with the production companies and studios involved in these films.